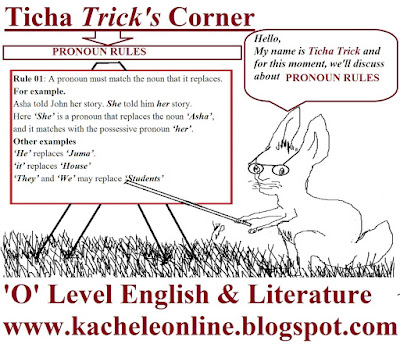 Pronoun Rule 01: A pronoun must match the noun it replaces.

For example:
Asha told John her story. She told him amazing story.
Here 'she' is a pronoun that replaces the noun 'Asha' and the noun 'John' is also replaced by the pronoun 'him'.

Other examples:
'He' replaces 'Juma'
'It' replaces 'House'
'They' and 'We' may replace 'students'

Students’ Task
Allow the students to make a list of sentences in which pronouns match with the words/nouns they replace. Guide them to practice the drills on this rule by mentioning examples such as:

Juma is good boy. He does well in the exams.
Asha cooks well. She is a good cook.
Form One students have good behaviors. They are good students.
Our house is big. It has many rooms.
I saw snake yesterday. It was in the green grass.

As they practice the rule, pass through as they work to help them.

At the end, correct their mistakes if there are any and conduct pronunciation drills of the words they have listed.

This rule is important because most people confuse when they use pronouns in the places of nouns. It is common to find someone saying this sentence; “Asha is my friend. He is also my classmate”.  In this sentence, Pronoun ‘he’ in the second sentenced does not match with the noun ‘Asha’. It is better to practice on the ways of using pronouns properly.
Next article Next Post
Previous article Previous Post