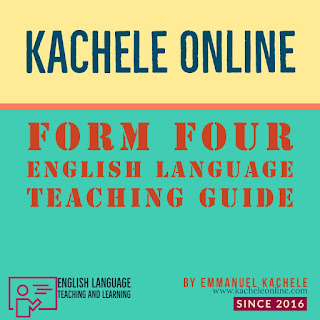 Review: Previously in Unit 10:3, we discussed about how to teach the sub topic ‘Writing expository compositions/essays’ in Form Three. In this sub topic, Form Three students were taught how to write good expository essays of not less than 200 words. Just like other writing task, this sub topic provided insights on how to study and teach students on how to express themselves in writing.

A: INFORMATION OF THE TOPIC:
1. Topic: SPEAKING USING APPROPRIATE CONTENT AND STYLE
2. Sub Topic: Negotiating solutions to problems
3. Periods per sub topic: 14
4: Class: Form Four.
B: HOW TO TEACH THE TOPIC:

5. ACTIVITIES AND GAMES TO FACILITATE A LESSON

Activity 1: Brainstorming On the Key Concepts of the Sub Topic.

The concepts like negotiate, negotiations, conflict, and resolution are to be discussed with the teacher and students in order to grasp their meanings. When these terms are mastered, students will be able to understand the contents of the sub topic well.

Activity 2: Pick A Character From A Literary Work!
The process involved here is identifying a conflict in a selected literary work. It might be a poem, play or novel.
A teacher selects a conflict from a literary work of his/her choice and a character or characters involved in the particular conflict. A teacher may also be more democratic by allowing students to choose which character or characters with problems they may discuss about
Then students are guided by the teacher to discuss a problem/conflict depicted in a literary work they have read or read it before. These are Form Four students, so they must have read various literary works.

After identifying a problem, the teacher should prepare and develop guiding questions for students to use when they brainstorm and discuss on the source of conflict, development of a conflict, and the end or resolution of the problem (if it was resolved in a particular literary work).

An Example of a Conflict from a Novel: Unanswered Cries
The Conflict between Olabisi vs Rugiatu and Salay.
‘Look, we don’t have to fight over this.’ Olabisi switched on a quick smile, like a politician. ‘Gborba is just a word like …’ She searched her brain for ideas.’ …..like mango, banana, Chinua Achebe, Shakespeare, things fall apart …’
Then things really fell apart.
Rugiatu spat in her face, a thick wad of mucus. Olabisi’s breath stopped in her throat. Without stopping to think she kicked Rugiatu in the stomach, unexpectedly, the way Eddy had taught her to protect herself. Rugiatu double over with pain and Olabisi punched her jaw. Hard! Rugiatu fell like cut wood.
Salay rushed forward with fingers ready to scratch Olabisi’s face to ribbons. Olabisi stepped aside, gripped Salay’s lappa and ripped it off her body. The effect was electrifying! Salay’s eyes flew wide open with shock. She was standing naked, except for a pair of cotton pants. Around her waist were several layers of coloured beads.
Olabisi started to laugh.
Rugiatu immediately attacked Olabisi like a mad dog. Olabisi felt her face burn as Rugiatu’s fingers scraped some skin off the back of her neck. She screamed and lashed out blindly with her fists. The first blow missed. The second one caught the slighter Rugiatu on the side of the head and she fell like a sack of rotten potatoes.
Olabisi had not planned it, but a feeling of madness had filled her head. She pounced, sat on the chest of the fallen girl and began to rip off her lappa. Nothing in the world could stop her now. She tore the lappa to shreds, then went for the pants and beads around Rugiatu’s waist. She gave them a sharp jerk.  ‘Now, I am going to see what you have between your legs that was circumcised,’ she shouted.
She was aware of a shadow rushing at her, then something blunt and heavy hit her on the head like a falling coconut. She saw stars, plenty of them, before a dark cloud came and blotted them out.

Guiding Questions:
A problem has been identified. Olabisi is in conflict with Rugiatu and Salay. The following are the guiding questions on how this problem can be negotiated in order to resolve it:

Assume you are Olabisi, Rugiatu, or Salay and respond to the following questions: (Use “If I were…. I would……”).

After reading this conflict, students use the guiding questions provided by the teacher to brainstorm in groups. After finding answers of their own, they can now present their answers for class discussion (of) their group work. A teacher can now lead a discussion with students so that to reach at a conclusion of the problem in question.

Activity 3: Discussing Common Problem People Face and Role-Playing.
The teacher can guide students to mention problems that people may find themselves facing in everyday lives. These are the common problems that people face and they need to be given advice on how to solve them.
These are the real problems experienced by the students at their homes, villages, and towns apart from those that have been discussed in the literary texts like Unanswered Cries and others. The students can mention some problems like they find in their local environments like:

Role-Playing
Playing a role of a person being advised by others on how to resolve a problem that he/she has. To dramatize this, one student (or students) can play the role of the advisor (or advisors) and the other the role of the person with a problem.

The students in pairs can also discuss how the mentioned problems can be resolved and the appropriate language to use for each problem or situation. To practice this, a teacher can allow students to choose one student from each pairs or groups and put him or her in the centre of the group. This target student at the centre can now express his/her problem to his/her fellow students who have surrounded him/her. Then, other students can start giving their advice by using appropriate language as instructed by the teacher.
For example, the target student at the centre of the group can state his/her problem like this; “I always suffer a terrible headache every morning I wake up”.
Then others can respond by advising him/her on this problem. For example, some of his/her friends can respond as follows:

Thus, all these are the suggestions, the friends of a target student can offer.
The students in their groups should now take turns to suggest solutions to the problem in question. Another student within the group can replace the first target student, state her/his problem and the group members can start giving advice to his/her problem at hand.

GRAMMAR PRACTICE: Uses of ‘If I Were….’

Why do we use ‘If I Were’ instead of ‘If I was’?
There one grammatical reason as to why we use ‘If I were’ and not ‘If I was’. The reason is that we use IF I WERE  because it is in the SUBJUNCTIVE MOOD, the mood which is used for HYPOTHETICAL  situations. The word ‘hypothetical’ itself means ‘possibilities’ or ‘assumed ability’. Thus, this condition is contrary to the fact or reality of the idea being expressed. The answer to this hypothetical situation is like “The fact is, I AM NOT YOU”.
In Subjunctive mood we use the following structure:
IF+I/HE/SHE/IT+WERE.
Examples:
If I were you, I could join JKT.
If I were a bank teller, I would be rich.
If I were not in this situation, I would die.

Can ‘If I was’ be used?
The answer is yes. This structure can be used but that structure cannot be called a Subjunctive mood but Indicative mood. However, an Indicative mood does not use ‘If’ structure and if ‘If’ is used, then the sentence should state the facts, not hypothetical information. See the following examples and compare them:
If I was sick, I would go to the doctor. (Hypothetical situation).
If I was sick, I would take same medicine (Indicative = stating some facts)

6: CONNECTION: Beyond the Sub Topic. In this sub topic, the teacher guides students to identify characters, setting, and plot. There are other literary aspects that should be considered when analysing any literary work. These other elements will be covered as students study and read more literary works.

7: NOTE: In this sub topic, a teacher should make students concentrate on identifying characters, setting, and plot of the story. After reading a part of the story as a starting point, students should now be guided to