Notes: Analysis of 'Marriage Is a Private Affair.' A Short Story by Chinua Achebe 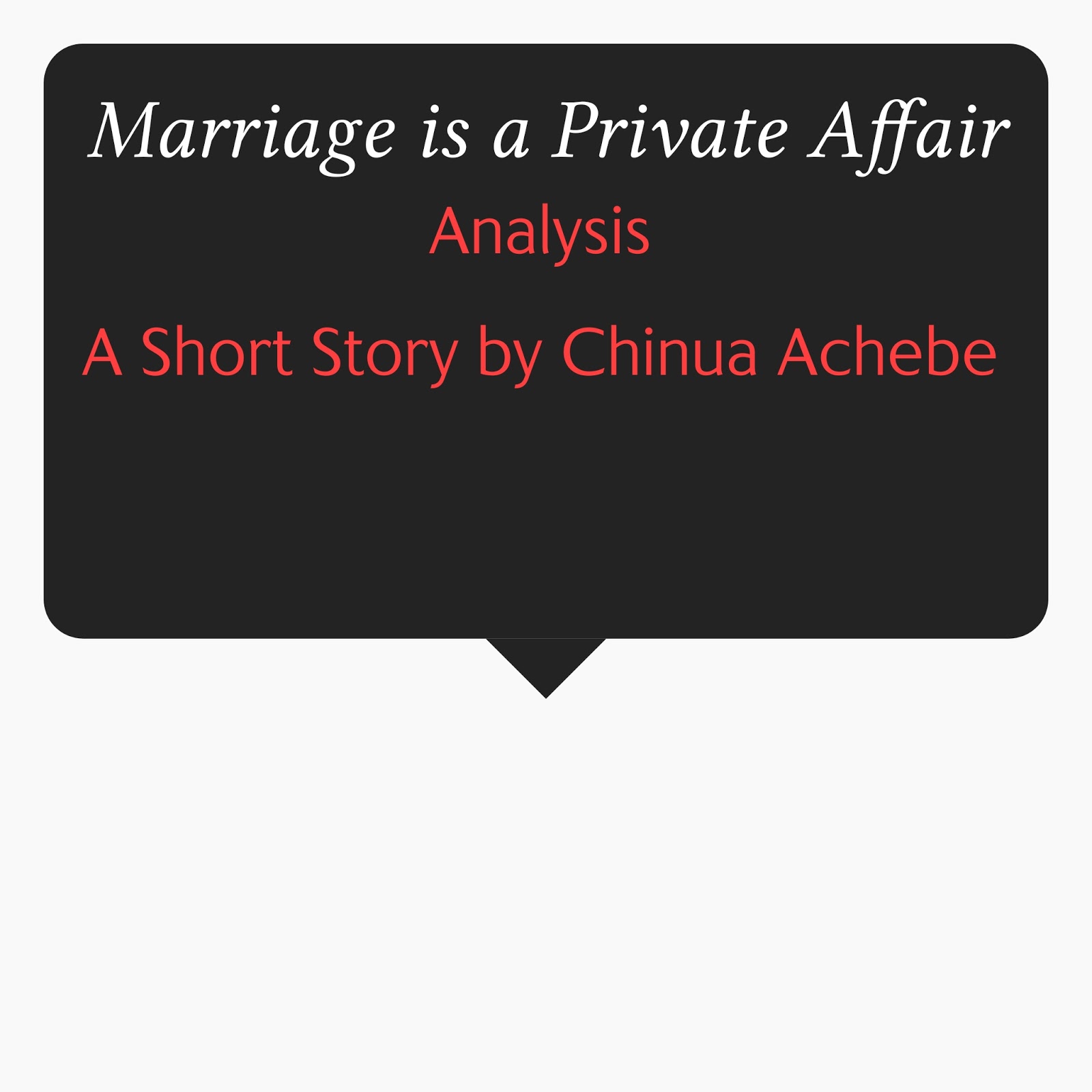 INTRODUCTON
Nigeria is a country with more than 250 ethnic groups. These groups have different languages and they often differ in religion, customs, and traditions. The Ibo and Ibibio both live in south-eastern Nigeria but traditionally they did not intermarry. As we can see in the story, a young Ibo man and an Ibibio woman have moved from their native regions to Lagos, a large and modern city in South-western Nigeria. But they encounter unexpected decision from the father of an Ibo young man who does not agree with their decision to intermarry. As cultural interactions intensify and become less significant the father’s resolution fails to work and he finally comes to realize that marriage is really a personal and private thing.
CONTENTS
ANALYSIS OF THE FORM
ANALYSIS OF CONTENT

ANALYSIS OF THE CONTENT
THEMES
The story has several themes/issues that result from various generational and cultural differences. The following themes can be found in the story:
Tribalism. Okeke, Nnaemeka’s father believes in tribalism. He believes that people of different cultural backgrounds cannot intermarry. That’s why he disagrees with Emeka marrying Nene. Even his fellow villagers, Madubogwu and Jonathan are all tribalists.
Superstition. This author describes this society that it strongly believes in superstition and witchcraft. For instance, Mrs. Ochuba kills her husband because she took a medicine to dishonest herbalist. This leads her to kill her own husband. Madubogwu is also superstitious for advising Okeke to take Emeka to the herbalist.
Irresponsibility. Okeke, Nnaemeka’s father is irresponsible for not playing a parental role. He does not play his fatherly role to his son, Emeka and he does not play his role to his grandsons. So, he is not a good parent.
Religious beliefs/Christianity. The people like Okeke, Emeka, Jacob, Nene and others strongly believe in religious/Christian teachings. This belief has influenced their daily lives. For instance, when Okeke refers to the Bible passage of 1 Cor. 14:34.
Marriage. The author also portrays marriage as one of the issues in this society. The author shows couple like Emeka and Nene who are from different cultural backgrounds who live together as husband and wife.
Culture. culture is a total ways of life of a particular society. Culture is being discussed in the story. It tells of two different cultures: an Ibo culture and Ibibio culture.
Position of women. Women in the story are portrayed as the ones who cannot participate in decision making and who take care of the family. They have also been portrayed as one who works like men like teaching as Nene does at girls’ school in Lagos. They are also displayed as disunited when the village women fail to cooperate fully with Nene.
Education. The influence of education is seen in this society. For others like Emeka and Nene, education has opened their minds and buried all their cultural differences. They look themselves as sharing common human goals rather than tribal qualities.
Disillusionment. Nnaemeka is disillusioned by his father who does not support him when it comes to his marriage. Nene is also disillusioned by Okeke, her father –in law, for not accepting her at first time.
Awareness. This is the situation of becoming aware of something. In the story, at last Okeke becomes aware that marriage is a private affair. It should be decided by the people who are going to live together, not by parents. He finally realizes the possibility of intermarriage in the society.
African traditions. This issue has also been discussed by the writer. Okeke, for example, is the one who observes traditions. However, in the end he realises that marriage and love are just private affairs which cannot be easily interfered by outsiders.
Conflict
Conflict. This story bursts with conflicts among people and ideas. The following conflicts have been portrayed by the author in the story:

MESSAGE OF THE STORY
The author of the story passes the strong message on the respect for the personal decisions on marriage as well as respect for some of the traditional beliefs. The author urges the society to respect marriages even if the couples are from different backgrounds. He beliefs that love comes naturally without regarding anything that can stand between the people who love each other. The writer also encourages people to stop spreading the elements of tribalism among themselves.

LESSONS (MORALS)
The story provides plenty of teachings (moral lessons) to the society. One of the moral teaching is that the society should learn that intervention in one’s marriage is not good because marriage is a private affair, not a public affair. Another lesson we can get from the story is that respect does not cost a thing. The third lesson is that tribalism is not the best way of life. People should live together without labelling them or segregating them.

PHILOSOPHY
Diversity is the philosophy of the writer of this story. The world is big. Some people are unable to understand that simple truth. They want the world on their own definition. They don’t want to believe that its people are just like them and their friends. But this is a foolish and blind wish. Diversity is not an abnormality but the very reality of our planet. The human world manifests the same reality and will not seek our permission to celebrate itself in the magnificence of its endless varieties. Civility is a sensible attribute in this kind of world we have; narrowness of heart and mind is not a good idea to take.

RELEVANCE OF THE SHORT STORY
The story is relevant to the contemporary society. In the societies we live now, there are a lot of people who do not accept the diversity. These kinds of people want to define everything on their own terms. They do not want to accept the viewpoints of others.