Download Full Analysis of 'Houseboy' (for Literature in English) 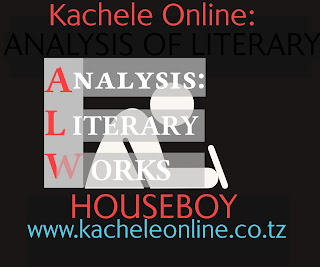 This is a story by a Houseboy written in the first person and in the form of diary entries in two exercise books. It describes the relationship between French colonialists and native Cameroonians during the period of colonisation from a Houseboy's perspectives.

THE PLOT OF THE NOVEL

The plot of the novel is divided into two exercises (diaries). The novel’s plot can also be sub-divided into eight (9) important events which are named as follows:

The story starts in Spanish Guinea with a Frenchman on vacation, who finds a man named Toundi. The man will soon die. The Frenchman finds Toundi’s diary, which is called an "exercise book". At this Spanish Guinea, an island in Atlantic Ocean, Toundi, a Frenchman from Cameroon is ill. He is found ill at the jungle village of M’foula. He cannot live to see tomorrow because his condition is bad. He has been badly injured and blood is covering his clothes. His hosts, Anton and his wife attend him. The drums beat and the people gather. The suffering man talks to his countrymen about how white men have mistreated him, and then he dies. He leaves one khaki bag, a comb, tooth brush, and two exercise books that he was using to keep his records as diaries. The rest of the story is of the diary (exercise book) that the Frenchman is supposedly reading. There is no further discussion of the Frenchman after this point.

The following is the whole story from his two exercise books (diaries).

PART ONE: THE FIRST EXERCISE BOOK

The first "exercise book" starts with Toundi living with his family. His father beats him constantly, and one day he runs away from his home. He runs to the rescue of Father Gilbert, a priest who lives nearby. His father comes back for him, telling Toundi that everything will be alright if he comes back. He denies his father's offer and after this point he no longer acknowledges his birth parents. It is also said that Toundi decides to run away from home when his greed led to a quarrel between his father and his friend's father. It was this greed for simple things like a lump of sugar that led him to seek shelter at Father Gilbert's residence and later the Commandant.

Toundi's mother even predicts that his greed will lead him to his death.