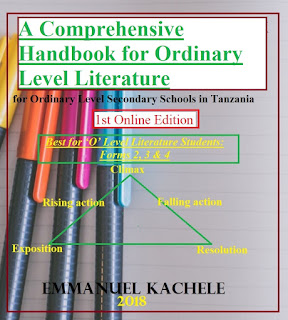 ANALYSIS OF SONG OF LAWINO

A Song of Lawino is a dramatic monologue which reveals two characters, Lawino and her husband, Ocol who are in disagreement because of their cultural differences. Both Lawino and Ocol belong to Acoli tribe. They represent African husband and wife in early days of African independences. Lawino represents African values while Ocol represents Western values. Therefore, Ocol is educated and westernized while Lawino is not. The poem is a song sung by an illiterate wife who complains about her relationship with her educated husband. Her persistent questioning of why she is abused simply for being African.

This anthology (collection) of poems consists of the total number of 13 poems.

- ‘My Husband’s Tongue is Bitter.’

- ‘I Do Not Know The Dances of White People’.

- ‘My Name Blew Like a Horn Among the Payira’.

- ‘The Mother Stone Has a Hollow Stomach’.

- ‘There is No Fixed Time for Breast Feeding’.

- ‘I Am Ignorant of the Good Word in the Clean Book’.

- ‘The Last Safari to Pagak’

- ‘The Buffalos of Poverty knock She People Down’.

- ‘My Husband’s House is a Dark Forest of Books’

- ‘Let Them Prepare the Malakwang Dish’.

ANALYSIS OF THE FORM

This long poem, monologue is divided into 13 poems which have been grouped into three groups according to the themes or content.

The following is the analysis of the elements of the form as found in the poetry.

‘Song of Lawino’ is a monologue poem. The title of the poem is symbolic of the cry or song sung by most Africans who are brutalized by the influence of Western culture in their societies.

The type of the poem

The type of the poem is a modern long dramatic narrative poem or monologue that involves one character who narrates hi/her actions and situations to silent listeners.

This is the arrangement or series of events in a work of art. The plot of this long poem is straightforward and is organized into three parts in which each part has its contents as discussed by the poet. The plot. The plot of the poem is chronological in the sense that the events happen chronologically from the beginning to the end. This is exemplified by the part of the poem called Song Of Ocol which is the continuation of the events raised in the Song of Lawino.

Part One: Lawino is scorned by Ocol, her husband

Lawino is the one who is scorned by Ocol for her adherence to African ways of life. Lawino is against Ocol’s Western views. She is also against Clementine who has stolen Ocol from her.

- ‘My Husband’s Tongue is Bitter.’

- ‘I Do Not Know The Dances of White People’.

- ‘My Name Blew Like a Horn Among the Payira’.

Summary of Part One Poems

Summary of Poem 1: ‘My Husband’s Tongue is Bitter’.

In this poem Ocol insults Lawino and looks down her. Lawino tells us how Ocol insults and looks down on her and her ways, family, clan, and all black people and their traditional ways. Lawino reacts to Ocol’s insults by mocking him with his Western ways.

Summary of Poem 2: ‘The Woman With Whom I Share My Husband’.

In this poem, Lawino attacls Clementine, a city girl who is her rival for Ocol’s love. She despises the way Clementine lives that are artificial ways of beautifying herself like using cosmetics, wearing wigs, slimming and other similar ways. Lawino thinks that she can compete with Clementine by welcoming her husband warmly, and by preparing good meals and other traditional things.

Summary of Poem 3: ‘I Do Not Know The Dances of White People’.

Lawino attacks European dances in this poem. She says the Europeam dances are meaningless, immoral and unhygienic. They encourage people to embrace and kiss in public and hence ignoring the respect for relatives. In addition, they dance in darkness, with the dancers drunk, smoking and wearing improper dresses. For Lawino, she prefers the African traditional dances which she believes are meaningful, require skills and they are danced in broad day light and in the open air.

Summary of Poem 4: ‘My Name Blew Like a Horn Among the Payira’.

In this poem, Lawino talks about Acoli’s games, dances and songs. She describes the games, ornaments and other accomplishments of the Acoli’s youth. She remembers how beautiful and skillful she was when she was still young and how she used to be admired by all the boys including Ocol because of her beauty, singing and dancing.

Summary of Poem 5: ‘The Graceful Giraffe Cannot Become a Monkey’.

Lawino blames and condemns Western hairstyle in the poem. She condemns the Western hair treatment and the wearing of wigs and handkerchiefs. She sees that there is no reason for copying the Europeans in their fashions and styles because what is good for Europeans may not be necessarily good for Africans. She also describes the beauty of traditional hairstyles and adornments of body and the way they attract young men.

In Part Two, Lawino decides to defends herself. He defends the customs of her ancestors with more and more profound comparisons between Western and Acoli ways.

- ‘The Mother Stone Has a Hollow Stomach’.

- ‘There is No Fixed Time for Breast Feeding’.

- ‘I Am Ignorant of the Good Word in the Clean Book’.

- ‘The Last Safari to Pagak’

- ‘The Buffalos of Poverty knock She People Down’.

Summary of Poem 6: ‘The Mother Stone Has a Hollow Stomach’.

In this poem, Lawino confesses her ignorance to eating with forks and spoons. Lawino confesses her ignorance to Western ways of eating. She despises the tastelessness of the tinned and frozen foods and the cooking stoves of the Whitemen. She describes how every young Acoli girl is taught to look after the home and prepare food. She also describes how nicely her mother’s house is organized.

Summary of Poem 7: ‘There is No Fixed Time for Breast Feeding’.

In this poem, Lawino compares the Western ways of telling time. She compares the process by counting seconds, minutes, and hours by clocks with the African traditional ways of observing nature or by needs felt by human beings. She makes fun of Ocol for becoming slave of time to the extent of being unhappy and restless and blames him for treating his children and relatives with great disrespect for the sake of observing time.

Summary of Poem 8: ‘I Am Ignorant of the Good Word in the Clean Book’.

The poem shows how Lawino is ignorant of Christianity. She has different attitudes towards Christianity. Lawino expresses her views to those who preach Christianity. She blames the preachers of Christianity for misleading and maltreating their converts. She shows that the missionaries are wrong in their ways of thinking, education, sexual morality and naming individuals. She blames the preachers again for preaching good things but practicing things contrary to Christian ways. She also thinks that it is better to join with her poor people in the area where meaningful and relevant songs and cultural activities are performed.

Summary of Poem 9: ‘From the Mouth of What River?’

Summary of Poem 10: ‘The Last Safari to Pagak’

In this poem, Lawino tells how Ocol despises traditional medicines, hygiene, food, and child upbringing. She believes that like European medicines, some Acoli medicines work and so do, not. She compares her beliefs in traditional spirits and charms to Ocol’s beliefs in rosaries, angels and the power prayer.

Summary of Poem 11: ‘The Buffalos of Poverty knock She People Down’.

In this poem, Lawino attacks local leaders of two rival political parties including Ocol’s Party. She attacks these parties very furiously. Ocol and his brother, are all leaders of these political parties and they talk about independence, unity, and peace but they only bring conflicts, more misunderstandings and disunity even within their families. She also attacks the folly of these leaders like engaging in political conflicts, and forgetting the sufferings of the people under poverty, ignorance and diseases.

Part Three of the book sums up the concerns of the two parts above with all poems discussed. Part Three shows Lawino’s desires to win back Ocol’s love and admiration. It also portrays the commentary on Acoli community and an appeal for the renewal of traditional ways.

- ‘My Husband’s House is a Dark Forest of Books’

- ‘Let Them Prepare the Malakwang Dish’.

Summary of Poem 12: ‘My Husband’s House is a Dark Forest of Books’

Summary of Poem 13: ‘Let Them Prepare the Malakwang Dish’.

In this poem, Lawino advises Ocol on how to regain and retain his last manhood. According to Lawino herself, Ocol can do that by throwing away all the symbols of hypocrisy, by begging for forgiveness of the elders, offering traditional sacrifices and by using traditional doctors and medicines.

Characterization. The poet has created the realistic characters who appeal to the experiences of the modern societies. In this dramatic poem, the three main characters have been created; they are Lawino, Ocol, and Clementine. Lawino is the central character of this anthology.

The following is detailed explanation of these characters:

EDUCATION. She is an African woman who has no any formal education. She is not even converted to Christianity.

WIFE. She is the wife of Ocol.

CULTURALIST. She is proud of her status as African woman. She is also proud of cultural things especially Acoli culture.

TRADITIONALIST. She is a strong upholder of African traditions (good or bad).

RESPONSIBILITY. She is a responsible mother who cares about her children and her husband, Ocol.

UNINTERESTED IN WESTERN CULTURE. She despises all Western ways of life (good or bad) that are followed by her husband.

JEALOUSY. She is jealous especially for Clementine.

PROTEST. She protests against Africans who change their ways of living and adopt those of the Whites.

NB: Your opinions, criticism, and suggestions are welcome and highly appreciated.

Your support and contribution will guarantee the smooth, uninterrupted, consistent, and polished flow of these materials and make this world a better learning place for everyone.

Thanks. You are welcome!

Congrats! I wish you all the best in your teaching.

Of course. But it depends on the curriculum or selection of works in your respective country. Thanks!

Thank you. You are welcome!