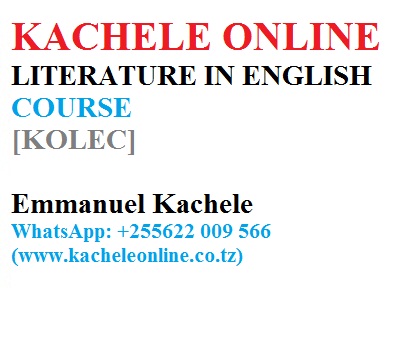 ~ PART ONE ~
INTRODUCTION
(An Overview of the term Literature)
Literature as a separate discipline has been defined differently by several scholars. The simplest definition of literature is that it is simply anything that is written. So, textbooks, brochures, newspapers, manuals and so on are all forms of literature.
For instance, if you buy a Television Set, you will be given its instructions manual (it's literature). However, not any writing can be termed as 'literature' because for a composition to be called 'literature' it must have some literary values.
~ PART TWO ~
DEFINITIONS OF TERM 'LITERATURE'
The term 'Literature' has been defined as follows:
(1) Literature is defined as a piece of writing that is valued as a work of art, especially novel, play, and poetry.
(2) Literature also refers to the creative and imaginative writing which is designed to engage readers emotionally and intellectually.
(3) Literature is a reflection of social, political, economic, and cultural realities.
Conclusively, there are various definitions of literature but all of them amount to one, that is, literature is an art that uses language creatively to portray social and personal experiences.
CONCLUSION
Various scholars have defined the term Literature and it has remained with its core aspects such as artistic nature of it, creativity it has, its uniqueness in using the language, and its purposes in the society.
***
~ PART THREE ~
KOLEC: Lesson 02 Assignment: OVERVIEW (DEFINITIONS) OF THE TERM LITERATURE
[1] What is Literature?
[2] Why is it that everything written is not literature?
***
This course is prepared and offered by:
"KACHELE ONLINE LITERATURE IN ENGLISH COURSE "(KOLEC)
Social Media: @mannykachele
Instagram: @manny.english
Call/WhatsApp: 0622009566/0765884936
Email: kacheleonline@gmail.com
Website: www.kacheleonline.co.tz
© 2022. All Rights Reserved.
Next article Next Post
Previous article Previous Post