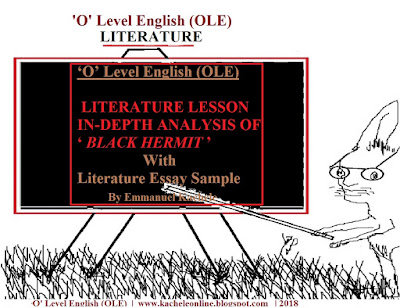 'O' Level English Literature is perfected with the best analysis of literary works.
Don't be left behind in grabbing the best analysis of literary work.
ANALYSIS OF BLACK HERMIT
INTRODUCTION
The play is about Remi, the young person who is first in his tribe to go to University. Being first in his tribe to get Western education especially for the university level, Remi faces three big challenges; first, to return home to marry his brother’s widow, whom he has to marry under tribal custom of widow inheritance; second, to continue to run away and be a ‘black hermit’ in the town, visiting night clubs with his girlfriend; and third, to support the Africanist Party when the people feel that the colonial oppression has just been replaced by another form of colonialism. The play has a lot of dramatic effects.
ANALYSIS OF THE FORM
The following is the analysis of the elements of the form found in the play:
The title. The title “Black Hermit” has been used by the playwright to suggest the content of the play and the relevant character, Remi who is an African who run away from home because of various reasons and become a ‘black hermit’ in the city. On page 35 of the play, Remi says, “I no want to be a hermit in the city”.
The setting. The setting of the play is relevant to the African rural life where villages are characterized by the issues like African traditions, illiteracy, and various customs. These were evident in colonial times, when most African countries were getting independences and even today there are still such incidents and issues.
The plot. This play is divided into three acts with three scenes for each.
ACT ONE: THE COUNTRY
Scene One
The scene opens in the country. In the hut Thoni is kneeled on the floor sorting out beans in the basin. Nyobi advises Thoni to take another man, but Thoni is determined not to go to a third husband although she cannot do without a husband. An elder enters; Thoni goes out leaving an elder with Nyobi. Elder tells Nyobi that a neighbour tribes envy them and he suggests Marua medicine to be used to bring Remi back to village. Nyobi agrees and bless the medicine. The elder goes out. Thoni comes in. Nyobi blames herself for going against the Chirst after blessing the traditional medicines. Nyobi, Thoni, Remi and elders are members of Marua tribe.
Scene Two
In the open air, there is a meeting. A leader tells elders that their tribe must rise up. They all agree that they want Remi to help them. They say that Remi wrote letter to them encouraging them to join the Africanist Party that is in power now. A leader chooses two elders who will go with him to go to fetch Remi. He tells the elders that when Remi comes he must not fall under the influence of his mother or Pastor. They agree and depart.
Scene Three
The scene is the same as Scene Two. Pastor enters, while Nyobi is running after him. Nyobi tells pastor how elders have decided. Finally, Pastor also decides to go to town to encourage Remi to come back to village.
➡️Download 'Black Hermit' Notes Here!
If you like these notes….

You can also ENJOY the following!