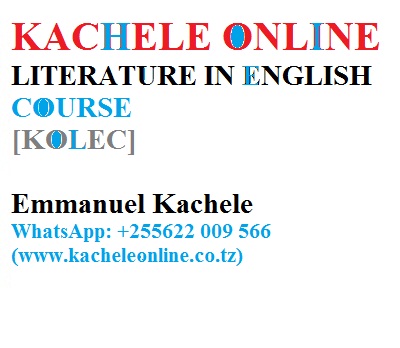 Figure of speech refers to the language method by which a speakers or writer uses to make his/her work look more attractive.

A figure of speech is also defined as a specific device or kind of figurative language such as metaphor, personification, simile and a symbol.

A figure of speech is never literally true, but a good one always suggests a powerful truth to our minds.

Figures of speech are employed by writers so as to make readers see people, things, and life in a new different way.

Here are some of the common figures of speech in literature:

An image is a representation of anything we can see, hear, taste, touch or smell. Imagery refers to the word pictures that writers use to create mental pictures into the reader's mind.

The imagery makes readers feel as if they are seeing, touching, hearing, tasting and smelling something just by reading the words.

These five senses are:

(i) A sense of touch. It may be evoked by such words as soft, smooth, and rough.

(ii) A sense of smell. It may be evoked by words like stinking rubbish, and smelling flowers.

(iii) A sense of taste. It may be evoked by words like salty, sugary, bitter, and sour.

(iv) A sense of hearing. It may be evoked by words such as hissing, bang, buzzing, and shouting.

(v) A sense of vision. It may be evoked by words such as desert, dense forest, night, cave, and cell.

(1) A sense of heat. It involves thermal senses and it may be revoked by the words like fire, hot areas, and electricity.

(2) A sense of motion. It may be evoked by words like trotting, jogging, staggering, and stamping.

Methods of revealing the imagery (images) in literature:

Images into the reader's mind can be created by using the following language techniques:

(i) Simile. His huge palm was rough like the back of the crocodile. (a sense of touch, sight and vision).

(ii) Personification. The stinking rubbish flew and visited every house in a minute. ( a sense of smell and vision).

(iii) Metaphor. His words are the bitter medicines. (a sense taste).

(iv) Hyperbole. A terrific hissing sound of a snake caused all people to faint helplessly. (a sense of hearing and sight).

Note. Imagery depends on one's experience. That means what makes one tastes may not necessarily make another tastes the same. For example, words like sugary and salty will only be effective to people who have prior experiences of the taste associated with these words. For those who have never tasted, their sense of taste may not be evoked to them.

This is a figure of speech that compares two unlike things without using conjunctions such as like, as an 'as....as'. A metaphor says that something is something else. The objects of comparison are usually incomparable.

It is a figure of speech that compares two dissimilar things by using conjunctions such as 'like' and 'as'. It compares or makes a comparison of two unlike things. Simile says that something is like something else.

It is a figure of speech in which animals, objects, the force of nature, or ideas are given human qualities. Personification is the process of humanizing the world or giving human qualities to nonhuman things.

This is a figure of speech that uses exaggeration to express strong emotion, makes a point, or evoke humour. It also refers to the exaggeration of facts for artistic effect in which it makes things look bigger or more powerful than they are.