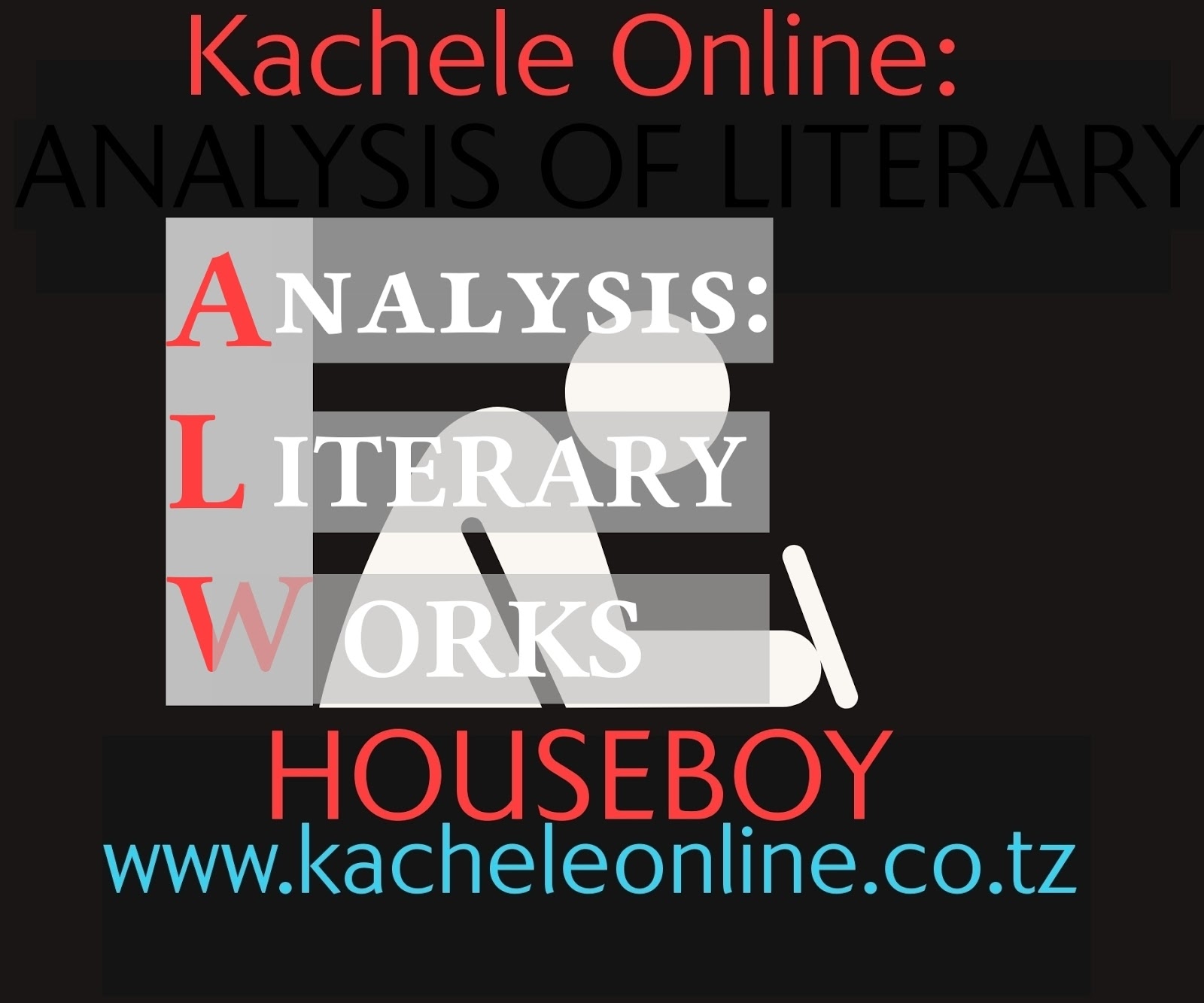 Theme is the main idea or ideas in a story. This is also a statement or the basic idea expressed by a work of literature. The theme develops from interplay of characters and plots. A theme may be broken up into several themes of ideas.
Every work of art has one theme which is expressed in one sentence or a short paragraph. This is called a main or dominant theme. However, this theme can be broken into various issues as result of actions of characters in the story.
The Houseboy's dominant theme is the Hypocrisy and Segregation Policy of the French colonialists towards the Africans. However, the novel can be broken into the following issues/themes:
DESTRUCTION OF MORAL VALUES/IMMORALITY
The whites in the book are shown as not having any self-values and self-esteem. Oyono shows this cultural contrast when Madame says, "You don't know? Contraceptives: contraceptives. Go on, tell everybody. What a subject for all the houseboys in Dangan to talk about. Go on. Get out.'" Through this we can see that even the usually hidden sexually relationship is being made public and Madame does not have any self-values when she lets Toundi know what the rubber bags" are.
IMPERIALISM
In general, the major thread of the novel is the evil of imperialism or foreign administration and the exploitation of Africans by whites.
Like Meka in The Old Man and the Medal, Toundi watches the development of events with his eyes gradually opening to the realities of French imperialism.
COLONISATION
The novel reflects Africans in Cameroon are under colonial domination. First, they were under German domination and later under French colonization in which Assimilation Policy was introduced.
EXPLOITATION
The nature of most colonialists is to exploit the indigenous. The Cameroonians are also being exploited by the French colonialists. Toundi, his father, and other Africans are intensively exploited by the French colonialists. For example, Toundi wakes up early at 5 oclock daily and works until midnight but he is not paid and is badly fed.
OPPRESSION
The author shows that Africans are oppressed and dehumanized. They are tortured and treated like animals. For example, Fr. Gilbert kicks Toundi so often and strokes his ear as if he is a pet animal. All the blacks seem the same to the white men. Sophia says, We dont mean anything to them. All French Africans are assimilated and treated the same. This is the hypocrisy of the white French men.
HUMILIATION
The Africans are humiliated. Father Gilbert gives Toundi old clothes. That is the way he is to him; just a thing to dump used and old things to him. Toundi and other Africans are humiliated and treated by the white men with no respect of human dignity.
CHRISTIANITY
Father Gilbert and Father Vandermayer are the Catholic priests who preach water but drink wine. This means that they preach good things from the Holy Bible but what they do is different. They preach love and equality but they still treat Africans as the same and animals to them.
Worst of all, Christianity was their perfect weapon to indoctrinate Africans. The same Madam asked Toundi to start forming a family since they were paying him enough. He replied.
"Perhaps, Madame, but my wife and children will never be able to eat and dress like Madame or like white children"
She replied
"Oh dear, you are getting big ideas. You must be serious. Everyone has their position in life. You are a houseboy, my husband is Commandant... nothing can be done about it. You are a Christian, aren't you"
AFRICAN TRADITIONS
Africans have been shown by the author as the people who observe their traditions. These are the social values and customs that are part of their experiences. The novelist has portrayed traditions like:
- Hospitality and Kindness;
- Traditional foods such as cassava, fish and porcupine;
- Village leadership like presence of Chief Akoma, the king of kings and Manguema in Dangan;
- Initiation ceremony as a qualification to adulthood;
- Extended family and other African traditions.
For example, Toundi lives with his sister and his brother-in-law. Toundi also is shown when he escapes to live Fr. Gilbert and leaves the initiation ceremony that is used to prepare the young people into adulthood. Toundi runs away from home on the eve of the initiation day when he should have met the famous serpent who watches over the men of my race, thus symbolically turning his back on the traditional life of his ancestors.
Instead of returning the child to his family, the white man accommodates him as some kind of Good Samaritan but in actual fact he is tearing him away from the bloodline of family relationships.

good morning sir kachele,,I do appreciate your hints and notes as they are helpful for us,,,,what I like is the way you summarize by using very simple and understandable language,,,keep it up sir

good morning sir kachele,,I do appreciate your hints and notes as they are helpful for us,,,,what I like is the way you summarize by using very simple and understandable language,,,keep it up sir