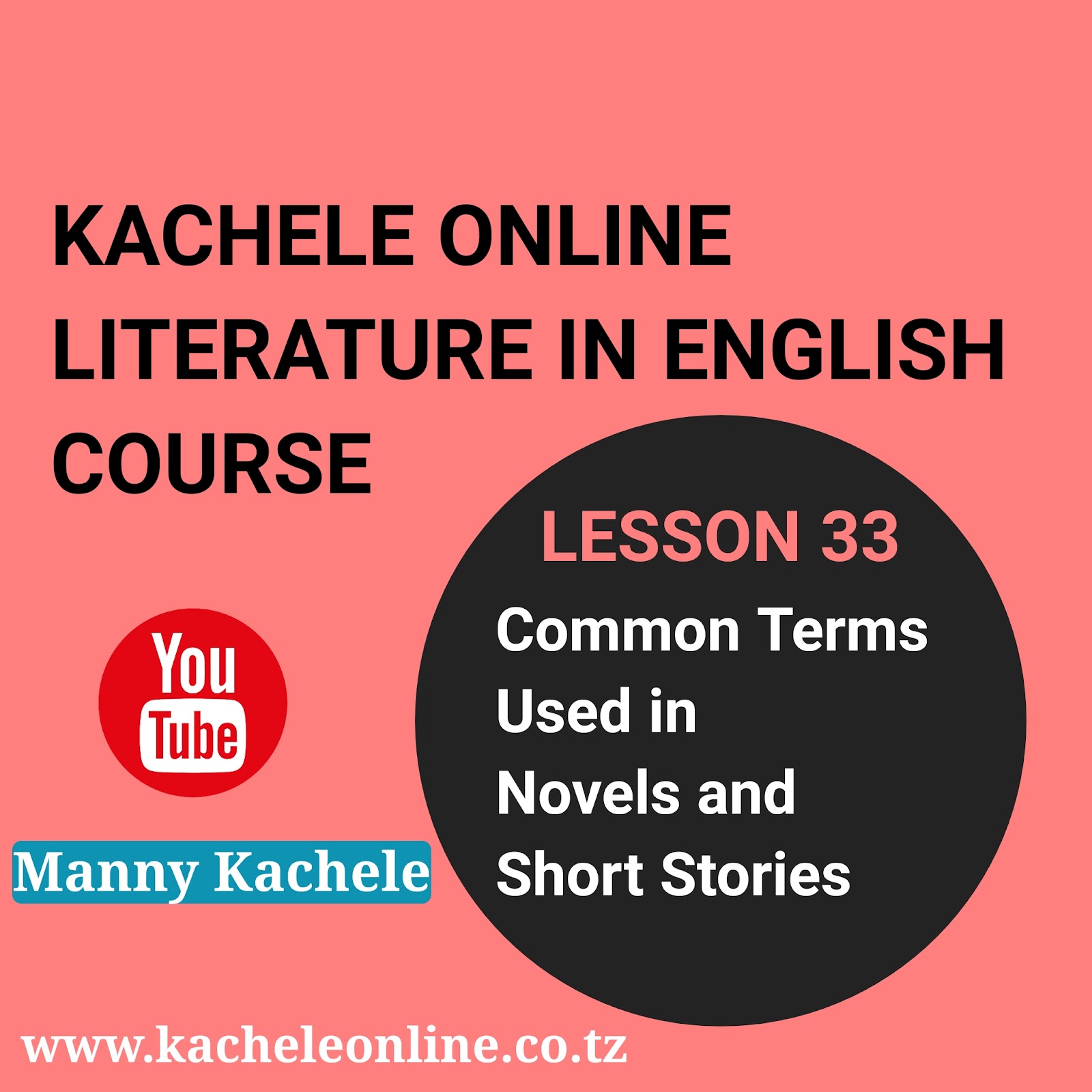 1. Antagonist
The antagonist is the character in the novel or short story who oppose the story’s main character (protagonist) or hero. This character is sometimes called a villain with evil intentions.
Example: Yah Posseh in "Unanswered Cries" is the villain in that novel because she opposes Olabisi.

2. Anthology
An anthology is a collection of short stories which are published together in a single volume or book.
The stories in anthology may be written by the single author or several authors can contribute their stories.
Example: "A Walk in the Night and Other Stories" is an example of anthology.

3. Autobiography
Autobiography is a book that tells the story of writer's own life. Most autobiographies are written by living writers. This author of this type of book has to be the person who is the subject of the book.
Example: "My Life, My Purpose: A Tanzanian President Remembers" by Benjamin William Mkapa is an example of Autobiography.

4. Biography
A biography is a book that tells the story of a person’s life. The author of the book is someone else other than the person who is the subject of the book.
Example: "Julius Nyerere: A Biography" by Issa Shivji and others is an example of a biography.

6. Dialogue
Dialogue is a conversation that takes place between two or more characters in the novel or short story. In the novel, a writer may use few dialogues to make characters exchange of ideas among various characters. It is the conversations that characters have with one another.
Example:
"Why are you not working, Richard?"
"I want to go to town to see if I can get a job", I replied. Pascal laughed and said,
"If I were you, I could not think about going to town".

7. Fiction
A fiction is the type of writing that is not true. It is not a lie, but it is a story that is a result of the writer’s mere imagination rather than real life situation.
Examples: All novels are works of fiction.

8. Genre
The term genre refers to a specific category or type of writing. In literature, genres include novels, plays, poetry, fairy tales, fiction, nonfiction, and many other examples of genres.

9. Hero
A hero is a character that works or fights for something in order to save lives or rescue some undesirable situations for the day. The hero may be the main character, but not always. Most works of fiction and nonfiction have a hero.
Examples: 'Sundiata' in "Sundiata" and 'Ihuoma' in "The Concubine" are the heroes.

11. Narrator
The narrator is the person who tells a story in a novel or short story. In a story or novel that has a narrator, the events are observed from the narrator’s point of view. Various written works of arts can have many types of narration.
Examples: Toundi in "Houseboy" is the narrator of the story in the novel.

13. Novel
A novel is a book-length work of fiction that tells a story. Most novels are written in narrative form.
About the size, a book should have at least 40,000 words or over to be considered a novel.
Examples of novels range from classic to modern novels. Examples of novels in this section are:
'Houseboy'
'The Old Man and the Medal'
'Sundiata'

14. Novella
A novella refers to a fictional work that is longer than a short story but not as lengthy as a full novel. In terms of size, novellas generally take the size of 17,000 words or over or under 40,000 words.

15. Plot
The plot refers to the main events that occur as the story is told.
Most plots follow a five-part structure as follows: that sets the stage with an
(1) Introduction
(2) Rising action. An introduction that is followed by a raise in action.
(3) The climax or the peak of the story follows.
(4) A decrease (or fall) in action comes after the climax, and then
(5) The final resolution of the story’s central issue comes at the end.

16. Point of View
A point of view (POV) refers to the perspective from which a story is told. For instance, when the main character is the narrator of a novel story, then the story uses first person POV because the word “I” will be used to tell the story. In other case, when story uses 'he saw', 'she said' etc, then the story is told using the third person POV. When the written work directly addresses the reader (you should), this reflects second person POV.
Examples: The novel 'Houseboy' uses first person point of view because Toundi narrates his events by using 'I'.

17. Protagonist
Protagonist is the main character in a work of fiction. This is the person around whom a story revolves.
Examples of protagonists:
- 'Toundi' - in "Houseboy"
- 'Meka' - in "The Old Man and the Medal"

18. Short Story
A short story is a brief work of fiction told in brief story form. Most short stories are too short to stand alone as a book. So, they are sometimes compiled into an anthology for publication as a single book or volume.
Short stories are also published in newspapers, magazines or websites. In size, short stories have between 3,500 and 7,500 words.
Examples of short stories:
- "Hawa the Bus Driver" by Richard Mabala
- "Kalulu the Hare" by Frank Worthington
- "The Voter" by Chinua Achebe
- "Marriage is a Private Affair" by Chinua Achebe

19. Style
Style refers to the way a particular author writes. It is a writer's individual’s style of creating works of art. It includes things like the author’s tone, word choice, and overall voice.
Example: The writer of the novel "Houseboy" uses the diary style of narrating story's events.

20. Subject Matter
A subject matter refers to the topic of a piece of writing. It is what a story or writing is about.
Example: A subject matter of the novel "The Old Man and the Medal" is the effects of racial segregation.

For More, check out these posts:

CONCLUSION
In order to expand your understanding of the novel or short story, you need to be aware of the various terms which are commonly used. These terms are the tools and will help you as you read and analyze the work of art.