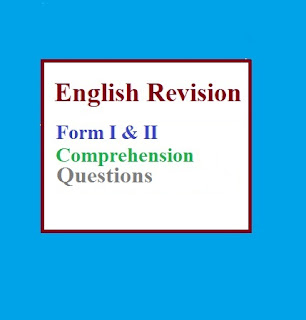 01. Read the following passage then answer the questions that follow:

One day when I was standard seven my fellow student called Najma told me that Basic mathematics subject is very difficult in secondary school level.  This made me develop fear and totally unconfident when I joined forms, one class, this year. We conducted orientation course for about six weeks (one month and two weeks) which made us fit to be taught by using English language as the medium of instruction in secondary schools. During orientation our class master Mr Makungu advised us we should not bother whatever subjects because all subjects are simple.

Thus, I advise my fellow students who used to claim that some subject is more difficult than other, to avoid that wrong perception because nothing is impossible.

(b) For how long orientation course carried out?

(c)  Which subject claim to be difficult according to the passage?

(e)  According to your views, which subject seems to be difficult? Give reason

02. Read the following passage carefully and answer the questions that follow:

Animals are not all the same. Some are big and some are small. Some of them live on land and some of them live in water. The largest animal in the world is the blue whale. It lives in the oceans. It can grow up to 150 tonnes in weight and it can measure 100 feet in length.

The biggest animal on land is the African elephant. It is also the strongest. The tallest animal in the world is the giraffe. It has got long legs and a very long neck. The most colourful feathers. Some animals are very ugly. The hippopotamus is possibly the ugliest. The cheetah is certainly the fastest and the snail is perhaps the slowest animal in the world.

03. Read the following passage carefully and answer the questions that follow by writing a letter of the correct answer in the box provided (FTNA KATAVI REGIONAL MOCK, 2018)

In order to make soap, you need raw materials like oil and soda. You can use either vegetable oil or animal’s fats. Vegetable oil can be obtained from palms, coconut, Soya beans, cotton seeds and whales. Caustic soda could be bought from SIDO stores. The following are the instruction for making soap.

First, oil is boiled in large drums; next caustic soda solution is added into the boiling oil. The liquid gradually rises and some bubbles are formed. When this happens some cold water and salt solution are added. This prevents the liquid soap from spilling over and stops it from becoming too thick.

The liquid is further boiled to produce soap and thick oil called glycerine. Next, some salt solution is added to separate the glycerine from the soap. Some perfumes and colours may be added at this stage.

Glycerine is removed and the soap is put in boxes to give it a shape. It then left to harden finally. It is removed from the box and bars. At these stages, the soap is already and can be used.

(a)     Write the letter of the correct answer in the box provided.

(I)      the suitable title of this passage should be;

(iii)    Salt the solution is added to the soap;

(iv)    When glycerine is removed it helps the soap to;

(v)     Raw materials are anything that;

(vi)    The final stage during soap making is that;

(viii)  When __ is added to the boiling, the lipid gradually rises and some bubbles are formed;

(ix)    According to the page how many things are used to get vegetable oil?

(v) Minerals like gold and diamond are raw materials ____

I think Tanzania’s forests are in danger of disappearing. It is possible that Tanzania might lose its entire forest cover in less than a century if urgent measures are not taken to control the rate of cutting the trees down. It is estimated that about a million acres of forest are lost each year.

Mount Kilimanjaro has been severely affected by indiscrimination by cutting down trees and frequent bush fires. The deforestation on its slopes has probably contributed to the melting of its glaciers. And this, I think, accelerates the demise of the snow caps. According to the UN, Tanzania’s population may be increasing by over two percentages per year; such an increase is likely to speed up the rate of deforestation due to the demand for charcoal. Charcoal is the cheapest source of energy. Not only is that but also another cause of deforestation of Tanzania’s forest demand for firewood, timber as well as agriculture.

(a)  Answer the following questions with reference from the passage:

05. Read the following letter below and answer the questions that follow after each:

Will you write to me and tell me about it?

Say hello to your brother Ngwido

This article has been compiled by Kachele Online Blog.