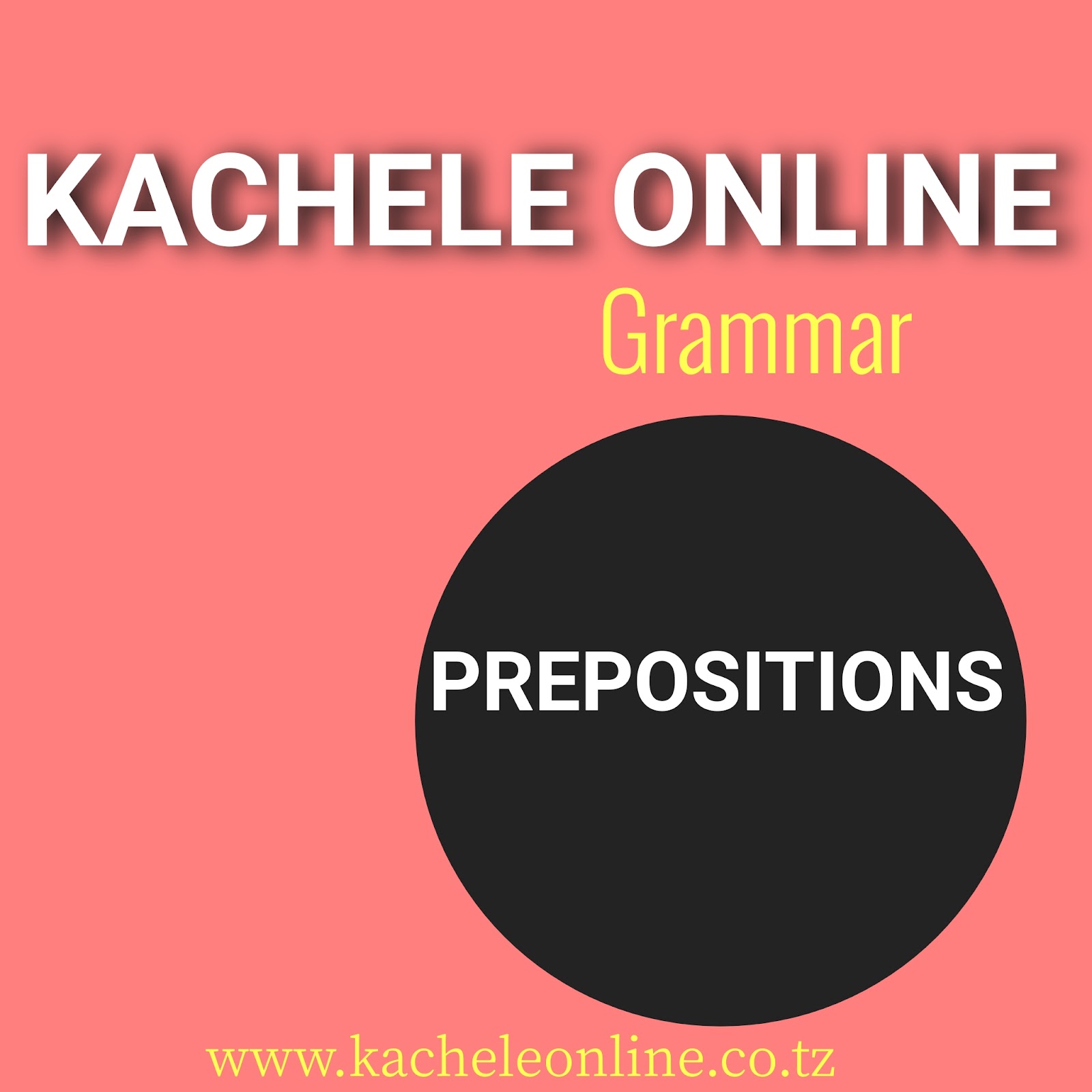 By definition, a preposition is a word or phrase that connects a noun or pronoun to a verb or adjective in a sentence. Prepositions are short words which are placed in front of nouns. Also some prepositions can be found in front of gerund verbs.

*Prepositions express position, movement, possession, time, and how an action is completed.

*They are also used to connect people, objects, time, and locations.

*Prepositions are spoken and written quite often in English. In fact, many of us use all types of prepositions naturally without realizing that they are distinct and have a name.

Examples of prepositions: of, with, at, from, into, during, including, until, against. These are 10 most frequently used prepositions in English.

(5) (into) The students moved into their respective classes.

(8) (through) The cat ran through the window.

The most common prepositions in English language are:

There are 10 most common types of prepositions:

(10) Prepositions of Agents or Things

HERE IS THE CLOSER LOOK FOR EACH TYPE OF PREPOSITIONS

Simple prepositions are used to show the relationship between nouns, pronouns, or to join parts of a clause or sentence. They are usually single short words.

Here is a list of simple prepositions. Most of them are common and they are used in every day conversations and writing:

(2) (across) She walked quickly across the street.

(4) (without) She came home without her school bag.

(6) (below) The river flows below the bridge.

A DIFFERENCE BETWEEN THE COMPOUND AND DOUBLE PREPOSITIONS

(1) (inside of) We hid ourselves inside of the tunnel.

(4) (outside of) Children are playing outside of the compound.

(5) Raindrops fell from above.

(6) (outside) She parked her car outside the house.

(7) (within) Changes come from within.

(8) (upon) Our success is totally dependent upon this player.

(9) (throughout) The students were laughing throughout the lesson.

(11) (upon) Once upon a time in Tanganyika, there was a famous person called Nyerere.

(12) (from behind) He came out from behind the curtains.

(14) (into) Two prepositions are made into one.

(15) (within) This building will be destroyed within a few minutes.

The Similarities and Differences Between Double Prepositions and Compound prepositions:

Double and compound prepositions  are very similar. Both are two-word phrases.

That's the main difference between them.

The most common compound prepositions are:

(1) (according to) According to the report, Malaria is slowing down.

(2) (apart from) Apart from this report, other reports are saying the same thing.

(4) (because of) The train delayed because of the rain.

(5) (by means of) We decided to travel by means of railroad.

A preposition of time shows the relationship of time between the nouns and other parts of a sentence.

Examples of prepositions of Time: at, in, since, for, on, at, from, to, ago, before, till/until, by, after.

(3) (Since) She has been cooking since morning.

IMPORTANT EXPLANATIONS ON PREPOSITIONS OF TIME

(2) The weekend begins on Friday.

(B) "At" is used with noon, night, midnight, and with the time of day:

(C) "In" is used with other parts of the day, months, years, seasons:

To express extended time, use these prepositions: since, for, by, from-to, from-until, during, (with)in:

(1) I will have finished the assignment by tomorrow.

(2) She has been gone since yesterday.

(4) The rainy season starts from November to May.

(5) This advertisement will remain here until May 2023.

* ‘On’ designates specific days and dates.

* ‘In’ is used for nonspecific when we measure time (seconds – year).

* ‘Since’ is used with specific date or time.

Examples of prepositions of place: under, over, across, behind, on, at, in, by, from, to, towards, up, down, between, among, through, in front of, above, below.

(5) (behind) Our house is behind the Postal Bank.

(7) (across) They live across the river.

IMPORTANT EXPLANATIONS ON PREPOSITIONS OF PLACE

(A) "At" describes a specific point in space.

(B) "In" describes an enclosed space.

(C) "On" describes an objects relationship to a surface.

(D) "By" describes an objects proximity to something else.

(2) His cafe lies by the train station.

Prepositions of direction indicate which direction something is moving. They express notions of location.

Examples of prepositions of direction:

through, behind, along, above, across, along, among, around, at, below, beside, over, toward, up, down, between, by, inside, in, near, past, under.

(1) (along) The train is moving along the beach.

(2) (across) She walked across the road quickly.

(4) (behind) The angry buffalo was running towards us.

(5) (around) The children are running around the house.

IMPORTANT EXPLANATIONS ON PREPOSITIONS OF PLACE AND DIRECTION

IN talks about the point itself.

INSIDE is used to express something contained.

ON talks about the surface.

AT talks about a general vicinity.

OVER and ABOVE are used to talk about something higher than a point:

(2) Hang this picture above the cupboard.

UNDER, UNDERNEATH, BENEATH, and BELOW are used to talk about something lower than a point:

(1) The mice dug under the ground.

(2) This valley is below sea level.

NEAR, BY, NEXT TO, BETWEEN, AMONG, and OPPOSITE are used to talk about something close to a point:

(1) She lives near the school.

(2) I found my pen lying among the books.

Note: "Sing along" is an example of a command using a Preposition of Direction

(3) (given) The fans were happy given the fact that they wanted to watch the match.

(4) (Assuming) Assuming the possibility of rain, the match was postponed.

(5) (during) The babies cry during the day and sometimes at night.

(6) (including) All students are in the classroom including the teacher.

(7) (Considering) Considering the possibility of rain, the players were told to return to their changing rooms.

These are the prepositions which are usually disguised as some other elements in English language.

This is a preposition that is not directly used in a sentence but is mentioned indirectly.

These prepositions unrecognizable but they are identified as "a" and "o" in sentences. “On” changed into “a”, and “of” can be changed into “o” respectively.

Examples: the words; o'clock, ahead, onshore.

(6) They play football once a week.

A detached preposition is a preposition that has been removed from its original place and moved at the end of the sentence. These prepositions are mostly detached from the interrogative or relative pronouns and adverbs.

Examples of detached prepositions: to, from, ahead, at.

10. PREPOSITIONS OF AGENTS OR THINGS

Prepositions of agents or things indicate a causal relationship between nouns and other parts of the sentence.

Examples of prepositions of agents or things: about, of, for, by, with, at.

(2) (about) This report is about women empowerment.

(6) (by) He will be accompanied by his friends.

Other examples of Prepositions of Agents or Things. These prepositions introduce the objects.

Examples of prepositional phrases/verbs: get in, look for, think about, wait for.

To agree = to agree with (someone or something)

To worry = to worry about (someone or something)

SOME DIFFERENCES BETWEEN PREPOSITIONAL VERB TO A PHRASAL VERB

(2) Phrasal verbs use adverbs as well as prepositions, while prepositional verbs do not.

(3) Phrasal verbs are normally separated by nouns and pronouns. For example, "Put your shirt on" or

"Put it on." 'Put' and 'On' are separated. But prepositional verbs cannot be separated. The two words must remain together.

SOME COMMON PREPOSITIONAL VERBS WITH EXAMPLES

These are prepositional verbs that we use every day. Try to learn them and remember how to use them.

EXAMPLES OF PREPOSITIONAL VERBS IN SENTENCES:

(3) (consist of) This exam consists of three sections.

(5) (depend on) Rains depends on the weather.

(6) (look after) She looks after the kids after school.

(work for) Who do you work for?

(9) (listen to) He likes listening to Bongo Fleva music.

OTHER COMMON EXAMPLES OF PHRASAL PREPOSITIONS OR PREPOSITIONAL PHRASE/VERBS

PREPOSITIONAL VERBS WITH AN OBJECT

There are a few prepositional verbs that have an object which can be put between the verb and the preposition.

Examples of these prepositions: remind of, provide with, thank for.

(3) (Provide + object +with) They will provide us with the items.

SOME RULES FOR PREPOSITIONS

English Grammar is a home to countless number of rules. Here are some rules that will be fundamental in understanding prepositions, detailed parts of speech, and English Grammar in general.

Prepositions have behaviours and rules that are important to consider. Some of them are:

Prepositions are always followed by a noun group which is called the object of the preposition.

(2) They are outside the compound.

Some prepositions can be used both for place and direction.

(2) I walked across the street. (direction)

(1) The cat escaped at the back of the house.

When talking about addresses, use "at" when you give the house number, and use "in" when you are giving the name of the street.

(2) He got a job in Mapinduzi Street.

When you talk about the type of vehicle or transport you use to travel somewhere, use "by":

When you walk somewhere, use "on foot".

When you are talking about cars, vans, lorries, taxis, and ambulances, use 'in', 'into', and 'out of'.

When you are talking about forma of transport like busses, coaches, trains, ships, and planes, use 'on', 'onto', and 'off'.

(1) He stepped off the train and run away.

Some adjectives can be alone or they can be followed by a prepositional phrase.

Some adjectives cannot be used without a prepositional phrase.

Adjectives that can be used alone or with "of" (preposition) to specify the cause of a feeling:

Adjectives that can be used alone or with "of" (preposition) to specify the person who has a quality:

- stupid - I broke the stick, which was stupid of me.

- clever - That was clever of you!

Adjectives that can be used alone or with "to" (preposition) referring to:

Adjectives that can be used alone or with "with" (preposition) to specify the cause of a feeling:

Adjectives that can be used alone or with "at" (preposition) usually referring to:

Adjectives that can be used alone or with "for" (preposition) to specify the person or thing that a quality relates to:

Adjectives that can be used alone or with "about" (preposition) to specify a thing or "with" to specify a person:

- happy (I'm happy about that/I'm happy with you)

Nouns that can be followed by "to" (preposition):

Nouns that can be followed by "for" (preposition):

Nouns that can be followed by "on" (preposition):

Nouns that can be followed by "with or between" (preposition):

Nouns that can be followed by "in" (preposition):

Verbs that can be followed by "about" (preposition) indicate the subject matter:

Verbs that can be followed by "at" (preposition) indicate direction:

Verbs that can be followed by "for" (preposition) indicate purpose or reason:

Verbs that can be followed by "into" (preposition) indicate the object involved in a collision: