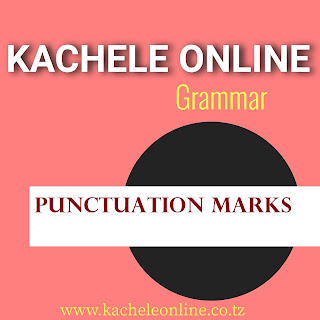 Punctuation is the use of conventional characters (e.g., commas, semicolons) to improve clarity. In general, punctuation aids comprehension by showing a reader which words are grouped and where to pause.

Here are the main punctuation marks in English grammar:

Punctuation Use and Examples

Below is a handy summary of how each of the main punctuation marks is used. There are easy examples as well as links to pages offering more detail and more examples.

The full stop is a symbol that is used at the end of the sentence to suggest that the sentence is completed. The Full Stop is also called a Period.

- It is used to end a sentence.

- It shows that the sentence is completed or declared.

- It is used at the end of a declarative sentence.

- It is used at the end of an imperative sentence (which is not forceful enough for an exclamation mark).

- It is used in an abbreviations, initialisms and contractions.

- She went to school.

- Please let me know if can do.

- Rama is a good student.

Question mark is a symbol that is used to express the question, interrogative statement, clause or phrase, in many languages.

- It is used at the end of the sentence.

- It expresses that the given sentence is a question or an interrogative statement.

Note: Any sentence that begins with Wh-type words asks a question or an interrogative sentence ends with a question mark.

- Are you sure about that?

- Who is the Head of this school?

- What do you want to form us?

- How do you know my address?

The exclamation symbol is used in a sentence of any phrase as a consonant ejective.

- It expresses intense emotion, strong feelings, joy, sorrow, and excitement or command by the sentence.

- It is used at the end of the sentence or the statements to show emphasis.

It is also be used in the middle of the sentence.

- What a lovely dress!

- Hooray! We won the match.

The comma is a symbol that indicates a pause in any clause or sentence.

Uses and examples of comma:

- It is used after setting the scene at the start of a sentence (Now he is wiser, he understands.)

- It is used after transitional phrases like However, Consequently, or As a result (However, I now understand why you did that.)

- It is used after an interjection (Oh, it's true!)

- It is used before a conjunction joining two independent clauses (She likes biscuits, and she likes cakes.)

- It is used as parentheses (Peter and John, who live next door, love my cakes.)

- It is used to separate list items (flour, bread, honey, jam and, potatoes)

- It is used with the vocative case (I know your uncle, Sarah.)

The colon is a symbol that has more than one meaning. The use of this symbol is to mark any ratio of a certain quantity.

Uses and examples of Colons are:

- Colons are used to extend a sentence to expand on something previously mentioned in the sentence (I need just one personal trait: loyalty.)

- They are used after an introduction (I've seen the following: rust, slime, and a rat.)

- They are used in references, times, and titles (Read Exodus 1:2)

- They are used with quotations (He said: ("Go quickly before they close the shops.")

A semicolon is a symbol with a dot on the above side and a comma on the lower side. Semicolon is used to link two independent clauses that are merely related.

Uses and examples of Semicolons:

- They are used in lists when the list items contain commas (Peter, the officer in charge; Colin, the chef; and Heidi, my dog)

- They are used to create a smoother transition between sentences, particularly when the second starts with a phrase like however or as a result (It was freezing; however, we still enjoyed it.)

- It is used before a conjunction which merges two sentences containing commas (Yesterday, it was, to our surprise, sunny; but today, as expected, it's dull.)

- Semicolons are not used for introductions (e.g., I would blame one thing for my divorce; beer. It should be a colon.)

A dash is a symbol used for separating the words in a sentence.

There are of two types which differ by size and usage as follows:

(1) The ‘En’ dash is small (–) and it is used for expressing range or connection between two units.

- There is a conflict near the Indo-Nepal border.

(2) The ‘Em’ dash is longer (—) and it is used in places where comma, colons, and parentheses can be used.

The hyphen is a punctuation mark that is used to join words and to separate syllables of a single word.

They help to show how the joined words are a single entities. They are also used to avoid ambiguity of words. The use of this symbol is called hyphenation.

- To join the words in a compound adjective

- To join the words in compound nouns.

- To join prefixes to words.

- It is used with the word breaks.

- My son is a nine-year-old child.

- My brother-in-law is a lawyer.

- Without pre-planning, no project can succeed.

- We sat on six-foot table.

- That car is ultra-expensive.

- They want to re-establish their business.

Parentheses is a symbol that is used to enclose any word or phrase or clause or to express additional information, thought, or a special remark.

It is also called a round bracket.

- They are used to insert extra information (often an afterthought, clarification, or expansion of a recently mentioned idea)

- They are used instead of using commas without affecting the meaning of the sentence.

- They are used to provide extra information regarding certain things.

- They are used to present a plural option with a singular one.

- The new railway track will be built to connect two regions (Tabora and Katavi) for trade and services.

- The novel "Mike and Beatrice" ('Mike na Beatrice' in Kiswahili) was written by Eric Shigongo.

- Your friend(s) must leave before midnight.

The square bracket is a symbol used to enclose any special content in a sentence or a clause. It is also used to insert explanatory material.

- They are used to highlight or specify the information with technical details in any sentence.

- They are used to define a subject in a sentence that recites any other person.

- They are used to make quoted text clearer by expanding on or replacing part of the quote.

- They are used to make it clear that terms like [sic] and [...] are insertions by the current author not the originator.

- He [the lecturer] was there when we arrived.

- He [Mr. Ramadhani Kayoko] was the referee of the match.

- The fans said that “[Didier Gomez] is their favorite coach.”

- In your speech, you wrote: "I support [sic] him for all the works he has done."

Curly bracket is a symbol used in the enclosure of the sentence to mark repeats or joined lines. In the formulae, they are used to derive something. It is also called the brace.

(Also called a forward slash, an oblique dash, or a virgule)

Slash is a symbol that looks like an oblique slanting line punctuation mark.

- It is used in a sentence to discriminate between alternative words. Example: Big/small.

- It is used for division or fractions in mathematical equations or to show the word “per” in measurements or units in formulae.

- It is most often used to represent exclusive or inclusive of something.

- It is used as a date separator.

- It is also used in the webpage address. It separates parts of the internet web links, addresses, or writing any file names.

An apostrophe is a symbol used as a punctuation mark to indicate grammatical possession or the contraction of two words.

- It is used to show possessive case.

- It is used to contract certain words.

- It is used to show time expressions.

- My friend’s mother is suffering!

A quotation mark is a symbol that is used to highlight, mark or enclose any word, phrase, clause, quote, thought, speech mark, sentence, or meaning. They are used to show the exact words spoken or written.

- They are used to name the names of things like ships, books, and plays.

- They are used to express the idea of alleged or so-called.

- His "mates" reported the issue to the police.

- Julius Nyerere once said during interviews, “Freedom and development are important.”

- “They went to the Arusha last week,” said his mother.

The Ellipsis symbol is a set or series of three dots that are used to indicate an omission of word(s) or used to switch from one phrase to another phrase.

- You won’t believe what I saw there was…